This week I have been reading books on how to present a humor writing workshop. I have decided that it's a lot more work developing a workshop than it is just to get up and entertain folks. You have to be organized to do a workshop. You need goals and objectives. You need meat and potatoes to serve people, not the whipped cream you can dish out at an after dinner talk. A three hour workshop requires about 300 hours of preparation -- at least for me. I think I must have a little ADHD because each time I sit down to start outlining the workshop, something distracts me. And I don't mean anything major. I see a pretty goldfinch out the window. My white cat rubs against my leg and I stop to pet her. The phone rings and it's another Congressman leaving me another unwanted message. The workshop is not until Oct. 29 so I have plenty of time IF I continue working and not procrastinating. It's not only writing humor that's hard, it's teaching people to write humor.
Posted by Jabber with Judy at 1:07 PM 2 comments:

I am currently enrolled in the All Original Playwright Workshop led by Lisa Soland, a talented playwright from Los Angeles who has published more than 25 plays. She is also an accomplished actress and impressive teacher. I am working on two ten-minute plays but haven't even completed one of them yet. It is really hard to write so much dialogue and add action and characterization and everything else. This is not as easy as I thought it would be, but it is making me do a lot of thinking and writing. I hope I can meet the deadline of March 27 with two ten-minute skits.
Posted by Jabber with Judy at 4:43 PM No comments:

My grandson Tailen is playing junior varsity for the Oak Ridge High School football team this fall. This means we are all involved! Every Wed. Dan and I stir up gatorade for 120 players and coaches who have been out in the hot sun for hours. I admit I drink a few cups of the stuff myself. The concession stand is pretty warm, too. On Monday's I'll be working the concession stand for the freshman games so I can sit in the stands for the JV games. Of course, on Fridays we'll be watching the varsity games since the JV will be going to those games, too. I'll probably be helping out in some capacity for those games, too. Supporting my children and grandchildren is something I really enjoy.
Posted by Jabber with Judy at 12:59 PM No comments:

Keeping quiet for a change

The month of May was the busiest month I've had for a while. Had so many speaking engagements I was tired of hearing myself talk. Among others I spoke for Knoxville Southside Rotary, Farragut Middle School, Norris AARP,and the Council on Volunteers at Rothchild's along with Bill Landry from the Heartland Series. Bill spoke before I did and got the 300-plus audience in such a good mood it didn't matter what I said during my talk. They laughed at everything. Really took the pressure off me. Maybe he can do that for me everytime!

Tomorrow night I speak for Knoxville Writers' Guild. Then I have a few weeks off before I fly out to Texas and speak at the Doerr Family Reunion in June. Then it's off to Capitan, N.M., where I'll speak at the library on July 3 and visit with many high school friends. And, of course, I'm looking forward to being on the panel at Southern Festival of Books in Nashville in October.
Posted by Jabber with Judy at 10:53 AM No comments:

Yesterday my publisher, Jim Johnston of Celtic Cat Publishing, and I traveled to the Shamrock Irish Festival at Rock City to sell books. Unfortunately, the wet, cool weather kept many people away, but Jim and I had a good time anyway. The festival was held in the outdoor pavilion which explains why we stayed cold all day. The outside temperature was 44. The inside temperature was the same unless you sat right next to the large stone fireplace, the only source of heat in the room. Plastic hung over every window, but it did little to keep out the bone biting cold.

I started out wearing two sweaters but finally added a thick coat on top. To keep warm Jim and I sipped cappuccinos, and ate lamb stew and corned beef and cabbage. We also tried one of the Irish beers. The only way to really stay warm was to stand in front of the fireplace, but unfortunately, all the other vendors and bands were standing there, too, so it was hard to squeeze in.

Among the bands was a Scottish band, the Chattanooga Pipe Band. Between the drums and the pipes, there was no danger of falling asleep when they played. It was mesmerizing to listen to and watch them in their black and red outfits with their red plaid kilts. I have decided I want bagpipes at my funeral. They make such a mournful sound.

We also heard the Molly McQuires, an Irish band that sang sassy Irish folk songs and other tunes and got the crowd singing and dancing. We didn't have much luck selling books yesterday, but Jim was invited to read some of his stirring poetry from his wonderful book, "Exile, Poems from an Irish immigrant." Hearing Jim read was the highlight of my day.
Posted by Jabber with Judy at 12:50 PM No comments:

Everywhere I go I hear people complaining about the cold weather. Not me. This year I am finally getting to wear my winter coat and all the sweaters I haven't used in years. I actually wore gloves and a muffler during those cold days the past few weeks. The one day of snow we had in Oak Ridge last week will probably do me for the year though. I like to look at snow, but I hate to drive in it. Of course, I had a hair appointment the morning it snowed, and I couldn't possibly cancel that! So off I went at 8 am, slipping and sliding down the side streets. The main ones were fine, but I drove very cautiously that day. The snow melted before my grandson even had a chance to use his sled though so he was disappointed. I was fine.
Posted by Jabber with Judy at 11:02 AM No comments:

I have fallen down on my blogging. Thanksgiving hit, and I've been on a roll ever since, not on my blog, however. Got the Christmas decorations up right after Thanksgiving including the new frosted greenery I found on sale at Marshall's last year. As usual, decorated the guest bathroom in snowmen including the shower curtain, the rug, and every inch of available space. It looks really cute, if I do say so myself. I even have snowmen soap and a snowman night light in there.

We went for a smaller tree in the living room this year. Actually, it's one I bought at the Festival of Trees last year, about 3 to 4 ft tall. Decorated it in lots of red ornaments and myriad tiny twinkling lights. It's sitting on a small table so the cat hasn't bothered it much. Dan hung blue lights outside, and I added a tree with colored lights and wooden ornaments made by our good friends, George and Judy Kidd.

We've had a good Christmas visiting with our chidren and grandchildren, Chuck, Michele, Damien, Daniele, Candie, and Tailen. I always hate to see them go though. I refuse to take down any of my Christmas decorations unil Epiphany on Jan. 6. I may even leave them up longer than that. It's really fun to sit in the living room with Noel, the cat, and a glass of wine savoring the holiday decorations. I'm in no hurry to take anything down.
Posted by Jabber with Judy at 3:40 PM No comments:

Jabber with Judy
I have written humor columns for a variety of publications including the Chicken Soup Books, Knoxville News Sentinel, The Oak Ridger, New Millennium Writings, CityView Magazine, and Ridges Magazine. Celtic Cat Publishing has released two of my humor books, LIFE AMONG THE LILLIPUTIANS, MEMORIES OF A LOOSE WOMAN, and a CD of humorous stories called JEST JUDY. 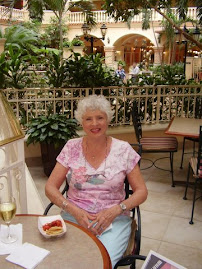